Solar panels have the ability to capture the sun’s energy and convert it into electricity. By installing solar panels, you can generate your own renewable energy to power your home or business.

Although they all have the ability to generate Solar energy, there are many factors that can affect a Solar Panel’s performance and durability. On this page we will take a look at the best solar panels available on the UK market today. 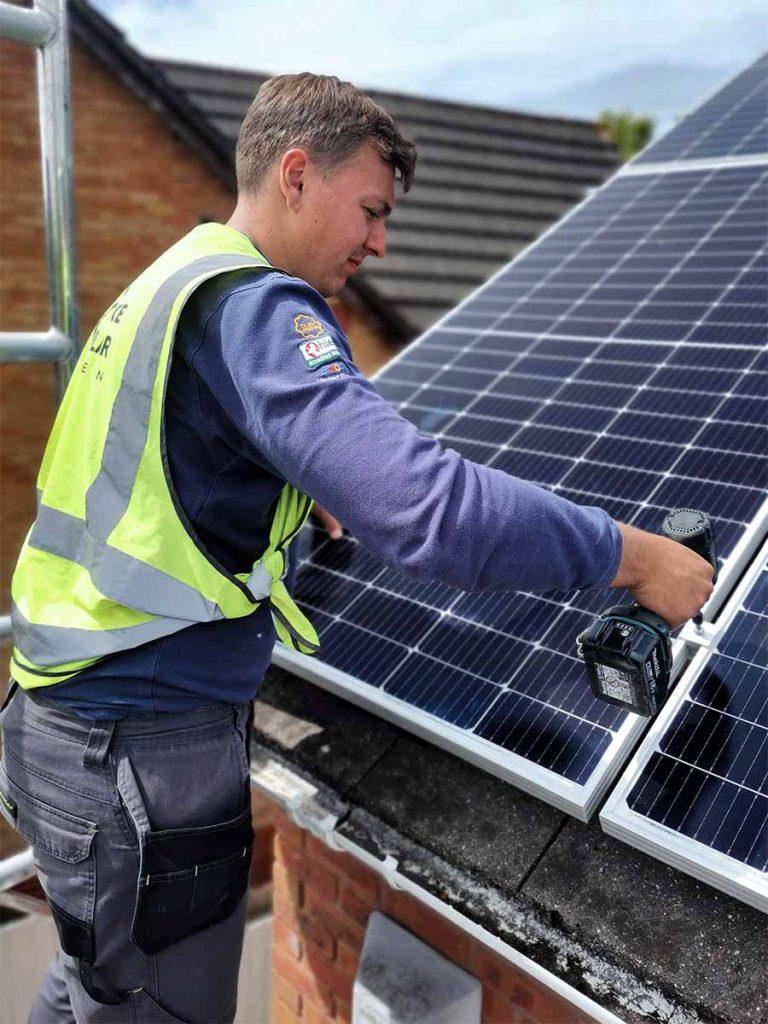 What is a Solar Panel?

A Solar panel traditionally is a panel made out of photovoltaic cells, sandwiched between layers of a semi-conducting material such as silicon, embodied inside a metal frame, covered with a sheet of glass. When the light shines and hits the PV panel a flow of electricity is created.

There are hundreds of solar panel manufacturers in the world. With big names such as Panasonic, Hyundai and LG entering the solar PV game, the list of solar photovoltaic panels suppliers is growing rapidly.

Here at Deege Solar, we install PV panels made by industry leaders Hyundai, JA Solar and SolarEdge. Brands you can be confident will be around for a long time. With more than 13 years in the solar industry, our green team can spot a high quality solar panel from a mile off. What’s more, we only choose to install the best solar panels available on the market.

How Do I Know Which Solar Panel is the best?

Choosing the right Solar Panel for your installation, is like choosing the right car. There are numerous factors to consider. Depending on which features you wish to prioritise, the best solar panel can differ project to project. Lucky for you, the team here at Deege Solar have put together a list of key features to compare before choosing which Solar PV panel to install.

To calculate how much electricity a solar panel will generate in a day, you simply need to multiple the wattage of the solar panel by the number of sunlight hours.

To calculate the size of a Solar PV system, you take the wattage of the solar panel you have installed and multiple it by how many pv panels there are in your array.

For example, if our green team was to install 10 400W Hyundai Solar Panels, you would be installing a 4 kilo-watt (kW) Solar PV System.

It is important to remember that the Wattage of a panel is given from “Standard Test Conditions.” So factors such as shading are not taken into account when using these calculations.

Solar panels consist of numerous photovoltaic (PV) cells. The type of solar cells a solar panel uses effects the panels features, as well as controlling the price, appearance and efficiency. There are three main types of solar panels: polycrystalline, monocrystalline and thin-film. However new cell technology is being introduced yearly. Understanding the difference in cell technology is the first step in choosing your perfect solar panel.

Monocrystalline or ‘Mono’ solar cells are manufactured by cutting single sheets from a silicon bar. These single solar cells allow for greater movement of electrons resulting in higher panel efficiency. Monocrystalline panels as a result tend to be more expensive, and are recognisable by their all-black finish.

PERC or ‘Passive Emitter and Rear Cell/Contact’ solar panels, have an integrated passivation layer. This layer helps to increase panel efficiency, meaning your panels can generate more electricity in the same size area. This is particularly useful when you only have a small roof area suitable for solar.

Half Cell PV modules can be recognised by the busbar running across the centre of the panel. By effectively separating the solar panel, the number of cells are doubled and made smaller. Smaller cells reduce mechanical strain, meaning microcracks occur less frequently. The half cell technology also reduces negative effects from shading and ‘hot spotting’. Improving the panels overall output, efficiency, and chances of ‘hot spots’.

Bifacial panels are designed to absorb light from both the front and back of the panel. By having solar cells mounted onto the rear of the solar panel, any light that is reflected by surrounding surfaces can too be absorbed. This allows the solar panel to absorb as much light as possible. Bifacial solar panels are best installed on a flat roof, surrounded by light-coloured roofing.

Shingle solar cells are solar cells which are cut into typically 5 or 6 strips. The strips of solar cells are joined together using an electrically conductive adhesive (ECA) that allows for conductivity and flexibility. Shingled Solar Panels provide an ultra-high efficiency with better performance in low irradiation.

Nowadays, thanks to Half Cell Technology, Solar Panels usually have 120 or 144 half cells. As by cutting the solar cells in half they discovered they could increase efficiency as well as longevity and heat dissipation. This is why most solar panels utilise half cell technology now.

If your roof space is fairly limited or fragile, then the size and weight of the solar panel you choose will be a high priority. The average size of a solar panel is approximately 2 m squared, but some manufacturers have managed to make some compact models. It is important that your solar panel installation can  accommodate for your energy usage. So if more energy is required to power your home, you will either need more panels or higher wattage or efficient panels.

If you are considering installing your solar panels on a flat roof, the module length for a solar panel to be compatible with the Renusol ConSole buckets is between 1550-2150 mm. However, extension bars can be fitted at an extra cost to fit larger panels. If is always worth discussing your options with a solar advisor first. If you are a UK home or business owner call our green team today on 01322 479369 or click enquire now to discuss solar! 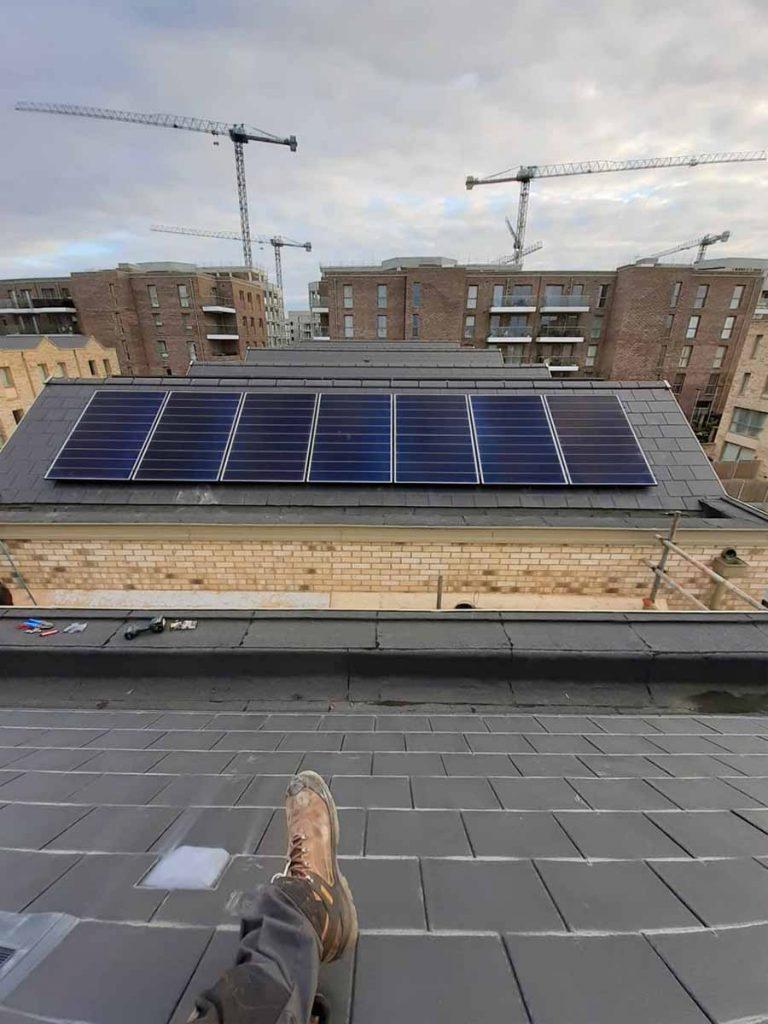 Another thing to consider is how the Solar Panel will look on your roof. When it comes down to the finish of a solar panel, everyone has different taste. The colour, finish of the back-sheet, frame, and busbars will all vary panel to panel. A black solar panel with a black frame, although more expensive, may give you the smarter appearance your home is looking for. You may even want to go one step further and opt for integrated Solar Panels. If aesthetics is a main concern, to find the best solar panel you should ask your solar panel installer to provide images before-hand of example installations. At Deege Solar we are more than happy to accommodate.

If you are investing in solar panels, you want them to last. Solar panel warranties can range from 10 to an impressive 25 years. It is worth noting that solar panels usually come with two kinds of warranties: Performance Warranty and Product Warranty.

Product Warranty refers to the seller’s guarantee that if the product proves to be defective within a specific time period, it will be repaired or replaced. The product Warranty of a solar panel tends to be shorter than the performance warranty, at around 15 years.

A solar panel’s ‘performance warranty’ or ‘linear output warranty’, is a guarantee that the pv panel will operate at a certain percentage of its original output after a certain number of years. This is typically somewhere between 80-90% after 25-30 years.

Below our green team have put together a comparison table for some of the solar pv panels available on the market. If you would like to find out more information regarding solar panels contact our team on 01322 479369.

How Do I Get A Solar Panel System Installed?

If you are a UK home or business owner looking to install an array of the best solar panels, get in touch with our green team. As MCS certified Solar Panel Installers, with over 12 year of experience, when you choose Deege Solar you know you are in safe hands. Call us today on 01322 479369 or click the enquire now button to talk to a solar expert, and find out which solar panel you should choose.
Enquire Now
Solar Panels
Youtube Facebook-f Instagram Linkedin
Previous articleThe Best EV Chargers of 2021 | A Guide To EV Chargers

Next article Living With Solar Panels