What Is a Solar Battery

How Does A Solar Battery Work?

Solar batteries work by storing direct current, (DC) electricity produced by your solar panels for later use. When your solar panel system is generating more energy than your home is demanding, the surplus (excess) energy is used to charge your battery. Instead of going back to the National grid. Later, when your solar panels aren’t producing enough electricity, you can draw energy from your battery storage. A built-in converter inside the battery, will turn the DC power into Alternating Current (AC) electricity, ready for safe use. To power your devices, appliances and your home from green energy. When your solar batteries are fully charged, your excess energy is then sent back to the grid. You will only ever draw electricity from the National Grid when your battery is completely empty. The higher your battery’s capacity, the more solar energy it can store. Resulting in more savings.

While batteries are usually part of a home solar PV system, they can also be used independant of solar, or with other renewables such as Wind turbines.

Solar batteries have a dual purpose in a grid tied system. Firstly, they can export unused energy to the grid. Secondly, they can import and store electricity. Some batteries (Smart batteries) can even use Artificial Intelligence to import energy when the cost of energy is at its lowest.

The Benefits of an Energy Storage System 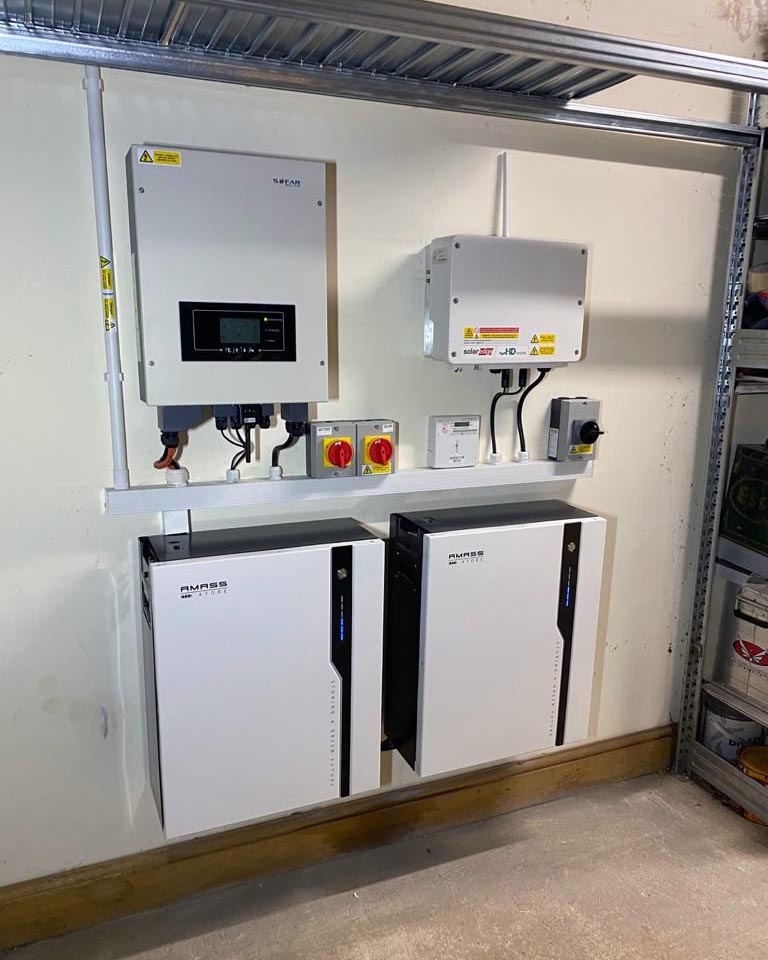 Although sunlight is one of our planet’s most abundant and freely available energy resources, factors such as time of year and geographical location can impact generation. By installing a solar battery you take your energy further. Gaining more control by being able to store your surplus solar energy.

By adding battery storage onto your Solar Panel system you will be able to use more of the energy your Solar Panels generate. Resulting in greater savings and less green energy waste. As a solar battery stores energy generated in peak sun-hours, you will have a continuous supply of renewable energy throughout the day. This means you will be relying more on green energy and less on “dirty energy” from the National Grid. Reducing your carbon footprint and bills even further.

By storing your solar energy and using it during peak hours, you will be reducing the amount of energy you will need to buy from your energy supplier. Essentially, adding a solar battery means thats more of your home energy usage will be green! Solar energy is effectively free to generate, however the energy you import from the Grid is becoming more and more expensive.

Although the Smart Export Guarantee (SEG) tariff, will pay you for your exported energy, the rates compared to the import costs still mean it’s best to keep as much renewable energy powering your home as possible. And with a solar battery installed this is now possible!

By installing a solar battery, you will be more self-sufficient. By relying less on the National Grid’s power supply, you will be impacted less by the increase in energy prices! A solar battery gives you the option of when to use your renewable energy, or when to draw from the grid. This gives you ultimate control over how much you are spending on your electricity and how much energy you are using and when.

Some solar batteries will enable you to use your solar electricity when there is a power cut ,so that you’re not left without power or lighting. When a power cut strikes, a storage of energy could be invaluable to your household.

How much does it cost to install a solar battery?

The cost of installing a solar battery is dependant on a variety of factors: Here at Deege Solar we are dedicated to providing transparent pricing for all our solar products. Our AC coupled Solar battery installation prices start from £3000 and range up to £6000. If you would like to discuss more about our battery storage options, including which solar battery is best for your home get in touch today.

What Size Solar Battery Do I Need?

The battery capacity your solar project requires is dependant of 4 keys factors.

This can easily be calculated through a pre-assesement, which we offer here at Deege Solar for free. Simply just fill out the enquiry form.

Next article Where Can I Store Solar Batteries