Tigo and SolarEdge both offer DC optimisers, that allow homeowners to gain better solar generation through optimisation. So what does that mean exactly? Well, system optimisation is one of the best solutions to reduce power loss through shading or panel mismatch. By installing power optimisers you can install your panels in different angles, locations and orientations. Allowing for greater design flexibility and improved home aesthetics. DC power optimisers are a cost-effective way of adding functionality to your solar panel system with unmatched performance.

In this blog we will review the pros and cons of both Tigo and SolarEdge optimisers in order to find out the best solar solution! Unravelling the truth behind the little box that goes underneath your panel.

Reasons to Get a DC Optimiser Installed

When a mismatch module produces less power than the other panels in a string, the power of all the solar panels in that string is drawn down. This impacts your entire system’s generation, and ability to be more green.
Mismatched modules can be the result of, the manufacturing process, weather variances such as shading, module orientation, or uneven degradation rates. However, not all is lost. A solar pv system with power optimisers installed will allow each module to produce the maximum energy. Despite mismatched modules, the performance of the entire system isn’t effected.

The SolarEdge inverter converts the DC power into AC power, designed to work specifically with the SolarEdge power optimisers. Compared to traditional string inverters, the SolarEdge inverter is more cost effective, and more reliable. In addition, with a record-breaking 99% efficiency, SolarEdge guarantees an improved ROI, independent of string length and temperature. Providing an amazing 33%-50% less loss than the market standard.
Whereas Tigo uses a normal, complete inverter, SolarEdge’s inverter spilts the traditional inverter into two parts. Firstly, the DC-to-AC is fixed inside an inverter casing to your wall ready for servicing. This provides a user interface, stores the systems communication devices. Secondly, the MPPT and DC-to-DC, they put onto the roof itself. As a SolarEdge system it running MPPT on every panel rather than the entire array, it is able to get more power out of the system.
In addition to its functionality as a DC optimised PV inverter, the single phase inverter also has the ability to manage battery storage, EV Charging, and other smart energy products. The 2.2kW to 6kW inverter, provides advanced safety features, including integrated arc fault protection.

By connecting the inverter to the internet, it can transmit system data to their free monitoring platform at module level. SolarEdge’s Monitoring system allows you to manage your solar energy and to control your connected Smart devices.

Whereas with a SolarEdge optimiser you have to also install a SolarEdge string inverter, Tigo optimisers work with any inverter. This is because Tigo’s TS4 optimisation technology works independently of the PV inverter itself. Using Tigo’s couldn’t be easier. You simply connect your Solar panels to a very small box that is clamped under the frame and then wire the panels together. The optimised output from the strings is then fed into any normal string inverter.

How Does a Tigo Optimiser Work?

Tigo uses a clever concept known as “impedance matching“ to help improve the power output of the array as a whole. Tigo adds more resistance, in parallel to the individual panels. In doing so it gives the power two possible paths it can take. One through the panel and one through a bypass tunnel around the shaded module. This is great as if one panel goes down the Tigo can cut it out of the string, however a potential issue is if one Tigo goes down so will the entire string.

Tigo also use Predictive IV technology, in order to predict the module’s optimal setting. By carefully controlling the resistance at every panel, you are maximising the amount of power being taken from the array as a whole.

Unlike SolarEdge, Tigo optimisers don’t have to be applied in every panel in the system. You only need to optimise the panels that are effected directly by shading. In other words, if a tree shadows just a single panel, it will only be that panel that requires a Tigo Optimiser. This makes Tigo’s solution a lot more cost effective.

Since the system operates at the string level, someone has to control it. Tigo’s MMU box, uses a Gateway to oversee the optimisers. As this connection is wireless, communications are sent every so often, meaning that system’s will struggle with temporary effects such as individual clouds.

The Tigo system can work with or without monitoring. All depending on which Tigo Optimiser you choose to install. To enable the monitoring feature, one must connect the Modules Optimizers, Tigo Access Point (TAP), and the Cloud Connect Kit. The Cloud Kit is not needed if it is already integrated into the inverter. 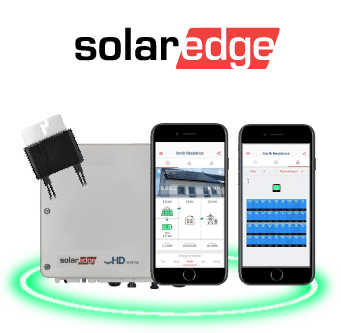 Both brands provide high quality and safe DC optimisation solutions. The Tigo solution is simple, flexible, and cost effective. On the other hand, SolarEdge is complete and robust. Either option is guaranteed to excel your solar system’s performance.

If you are looking at a Tigo or SolarEdge solution for your Solar PV Project and want to debate further, get in touch with our Green Team! You can reach us directly on 01322 479369, or by clicking the “Enquire Now” button.

Next article The History Of Solar Energy