How do Solar Panels Work?

Solar panels consists of numerous photovoltaic (PV) cells. When sunlight touches the surface of a Solar panel, the packets of energy from the sun (photons) are absorbed by these Solar cells. This causes the cells, to excite and start vibrating which generates green electricity. This process is known as the Photovoltaic effect, which was first discovered in 1839 by Edmond Becquerel.

All PV panels differ in efficiency. Meaning certain types and even brands of Solar panels can convert sunlight into electricity more effectively than others. This is because panels can vary in the number of silicon cells and type they have. The cell count of a Solar Panel often determines its cost, size and weight. Although it is often believed the more silicon cells a panel has, the high wattage and power output it will produce, this isn’t always the case. The power output of a panel is dependant on the quality and efficiency of the solar cells themselves.

In this blog we will explore the main three types of solar panel cells: polycrystalline, monocrystalline and thin-film. Understanding the difference between the three, is the very first step to selecting your perfect panel for your home, business or community. 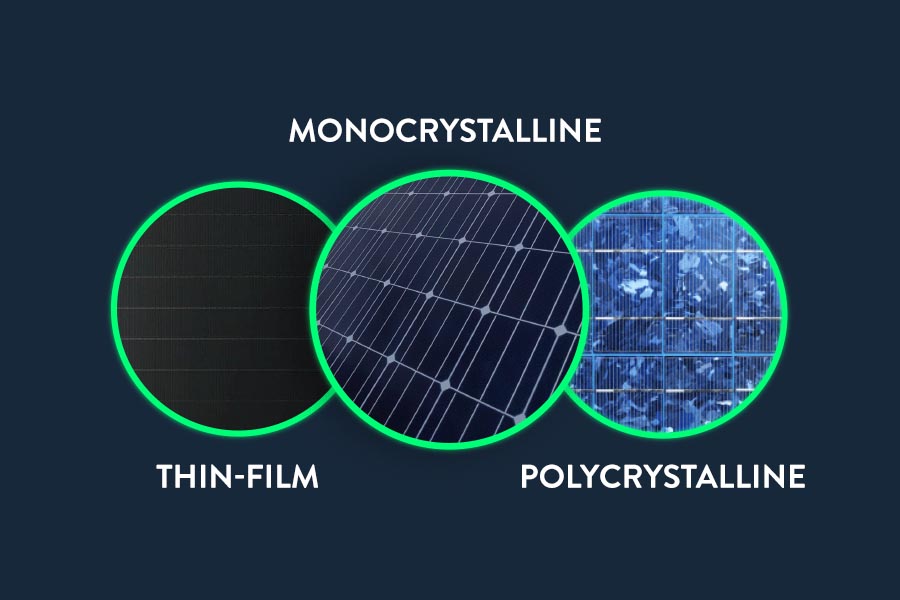 Monocrystalline panels are the oldest most developed type of Solar panels. As the name suggests, Monocrystalline Solar Panels are made from single (Mono) crystal (crystalline) silicon solar cells. To make these solar cells, pure silicon is formed into bars and cut into wafers. During this process, the cell edges are cut off, smoothen and rounded, to help the solar cells produce even more electricity. Although quite wasteful and time consuming, this gives the monocrystalline cells a recognisable appearance.

Polycrystalline cells can be identified by their blue finish, rectangular shape and speckles. They appear blue and speckled, as they contain many crystals in each cell and because of the way the sunlight reflects off these crystals.

Thin-film solar panels are manufactured from layers of semiconducting materials, such as silicon, cadium telluride, and copper indium gallium selenide. The semi-conductor layer is placed between transparent conducting layers, with a layer of glass on top, that helps to capture sunlight. Although silicon is sometimes used to make thin-film solar panels, it is not the same solid silicon wafers. Rather, it is a non-crystalline type of silicon.

Despite this, thin-film panel still have their place in the solar industry. As thin-film panels are more flexible, they can be used for a diverse range of applications. Including being moulded into shingles, or solar roof tiles, so property owners who don’t like the appearance of solar panels can still go solar.

So which type of Solar Panel is the best?

So which Solar Panel is the best? Choosing the right solar panel is always dependant on the project, and budget. Whereas Polycrystalline Solar Panels exceed in residential properties, due to the affordability, monocrystalline panels still have their place. For example, if the property has a smaller roof, the greater efficiency of the panels makes monocrystalline cells the better choice. Although, Thin-film solar panels are almost never used on domestic properties, they are useful for larger projects such as for commercial or listed buildings due to their lightweight nature.

If you are still unsure which type of Solar panel you should use for your project, Deege Solar are more than happy to help. If you live in the UK and would like more information get in touch on 01322 479369. Our team of Solar experts are always happy to help you find the best Solar solution for your project.

Next article Renting Your EV Charger: Peer to Peer Charging